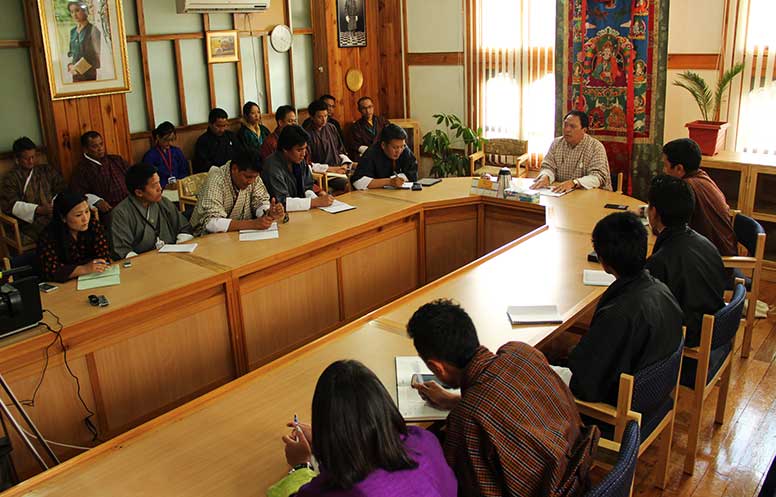 Bhutan’s example in ensuring a successful democratic transition must also be complemented by a successful economic transformation towards a self-reliant and sustainable economy built on the foundations of a just and harmonious society, as envisioned by His Majesty the King. It is the responsibility of institutions and agencies to respond to the national concerns and worries on the economy that have emanated from the Throne. The Royal Monetary Authority of Bhutan (RMA) would like to submit our heartfelt gratitude to the institution of Monarchy – the beacon of strength and inspiration for all Bhutanese people. His Majesty the Fourth King and His Majesty the King of Bhutan work selflessly and tirelessly to better the lives of all Bhutanese, through personal initiatives and through their constant guidance and support.

As a responsible public institution, the RMA is uniquely positioned to respond to those concerns that affect the public in matters resulting from monetary and financial policies. The RMA is pleased to announce that the entire financial sector has come together to work in harmony to collectively address the concerns of our higher authorities.

The financial sector plays a crucial role in boosting growth through financial intermediation – banks and non-banks act as the bridge connecting savers and investors. The financial sector must have efficient mechanisms to encourage savings and allocate the savings to productive purposes. The interest rate plays a catalytic role in this mechanism. As Bhutan poises itself for a successful economic transformation, financial intermediation and effective interest rate policy will play the determining role to boost economic growth.

Interest rates were fully liberalized from 1st October 1999 to promote competition and flexibility. However, interest on both deposits and lending remained rigid with high spreads. The RMA then introduced the Base Rate System in 2012 to promote transparency in the pricing of loans. A recently concluded review of the Base Rate System has revealed that although the Base Rate was relevant to the situation of excessive credit growth in 2012-13, the system has several rigidities: (i) computation was backward-looking and pre-emptive since the previous year’s costs were extrapolated into the coming year’s lending; (ii) computation also included a double accounting of margins which resulted in high lending rates, while deposit rates remained rigid; (iii) use of multiple Base Rates and computation of the previous year’s average return on net worth (ARNW) discouraged competition and financial innovation; and, (iv) the Base Rate was used as a tool to address multiple objectives such as promoting transparency in loan pricing and curtailing excessive credit growth.

As a result, the RMA is introducing a new, forward-looking and integrated interest rate policy called the Minimum Lending Rate (MLR). The MLR is a single benchmark or minimum reference rate for lending to be uniformly applied across all the financial institutions. On the common MLR, each financial institution will competitively add its expected spread to arrive at the final lending rates. The main objective of the MLR is to encourage competition and professionalism among the financial institutions to result in a balanced approach of engaging in financial intermediation. While the underlying focus may be directly on lending rates, equal emphasis will also be placed on deposit rates – with the objective of generating positive real interest rates that can stimulate more savings. The huge gap in saving and investments in the country indicate that we are net spenders, and therefore, incentives and new approaches have to be initiated to encourage savings both through attractive deposit rates and fiscal incentives.

Other objectives such as channeling credit to productive sectors and curbing credit for consumption will be tackled by supplementary tools and policies such as prudential regulations (both micro and macro) and strategic/priority sector lending strategies. The MLR will be implemented with effect from 1 st August 2016, and will be reviewed on a semi-annual basis, based on the end of June and December month’s balance sheets.

The policy imperative for the RMA is to support growth by channeling credit to growth drivers and containing credit for import-heavy consumption. This is because the high current account deficit remains one of the biggest challenges for the economy in the medium-term. Addressing this challenge will require both monetary and fiscal policy measures as well as other sector-specific reforms. On our part, the RMA’s monetary policy measures will be channeled through the prudent management of reserves and credit. The review of interest rates and introduction of an integrated MLR approach is one of many policy strategies that RMA will be undertaking.

On the reserves front, maintaining the stability of the exchange rate peg of the Ngultrum to the Indian Rupee remains one of the cornerstones of RMA’s monetary and reserve management policy. The renewed focus on reserve management is based on a twinapproach of efficiently and effectively managing existing reserves as well as providing incentives to encourage inflows, targeting in particular, inward remittances from nonresident Bhutanese as well as the earnings of exporters and FDI companies.

On the credit front, mindful of the important role of finance in promoting investment, initiatives include interest rate policy reform, direction of domestic credit to productive sectors, and strengthening the institutional and regulatory capacity of the financial sector.

The RMA would like to inform the Government, media, and public that the effect of the change in the interest rate policy will not be immediate. The impact is expected to be gradual, over the period of a year, as financial institutions increase their expertise and institutional maturity in competitively determining the interest rate structures. However, the platform has been set for proactive competition and professionalism with expected positive changes.

The new policy will be tentatively effective from 1st August 2016 and the financial institutions are expected to bring about gradual changes from the following month.

The RMA would like to thank the Government, the financial institutions, the private sector and the Bhutanese public for the kind support.