The Royal Monetary Authority with the financial assistance from the Asian Development Bank (ADB) introduced the Cheque Truncation System (CTS) in April 2007.

The CTS was introduced to :

The modus operandi of the CTS operates on the basis of cheque images and electronic data received from the service centers/regional Clearing House (RCH) strategically located across the country, and is settled through a central Clearing House located in the RMA, Thimphu. The physical movement of cheque is restricted up to a designated service center where the cheque is truncated and the corresponding electronically captured image is used as the substitute for processing clearing and settlement.

By viewing and analyzing the data representations given below, it is plausible to ascertain that the cheque volume from Thimphu RCH and Phuentsholing RCH collectively accounts for more than 80% of the total volume. Although the figure contributed by Gelephu RCH and Mongar RCH is minuscule, the important role it plays in the overall settlement of clearing outstation cheques cannot be undermined.

The average number of cheques presented on a daily basis is about 900. The following table represents the distribution pattern of the average volume amongst the four service centers:

"With a view to inter-connect the ATMs, POS in the country and facilitate easy banking for the common man, the RMA conceptualized the idea of implementing the Bhutan Financial Switch".

The Bhutan Financial Switch (BFS) will facilitate connectivity between the Bank's Switches, and inter-bank payment gateway of various e-commerce transactions and activities both domestic and international.

The BFS has two components:

Types of cards that will be accepted in the country:

POS Integration provide a valuable facility for visiting foreigners, promoting cashless transactions will enhance convenience and safety for customers and merchant businesses; support expansion of business clientele; help monitor the flow of transactions within the economy, improve transparency in business financial disclosure, as well as reduce costs associated with the printing of currency.

Banks joining the BFS Network should meet the following criteria:

Bhutan Immediate Payment Services (BIPS) is an important initiative to promote the use of digital payments in the country. BIPS empowers customer to remit money through different channels, such as the Internet banking, mobile phones, and ATMs, to any other receiver in any of participating banks. The system is managed by the Royal Monetary Authority of Bhutan by interconnecting all the member banks. Furthermore, it has additional Payment Gateway functionality to allow various types of e- and m-payments, such as citizens-to-government (C2G), business-to-business (B2B), government-to-citizens (G2C), etc. BIPS was publicly launched on 27th January 2017.

What are the advantages of BIPS?

Anytime & Anywhere: Available round the clock, 24x7 including weekends and holidays

Simple: All you need for executing BIPS transfer are the beneficiary's account number.

Secure: BIPS is based on two-factor authentication (2FA)

What are the Use cases of BIPS? 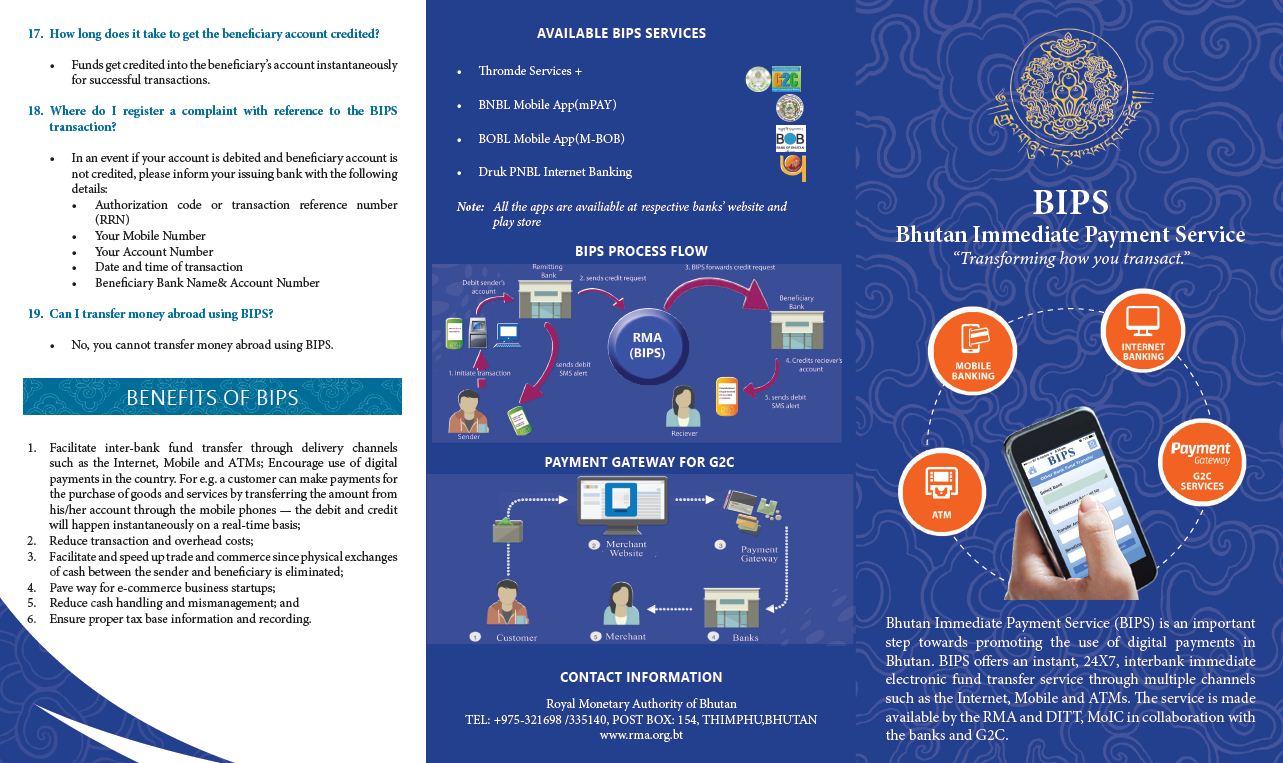